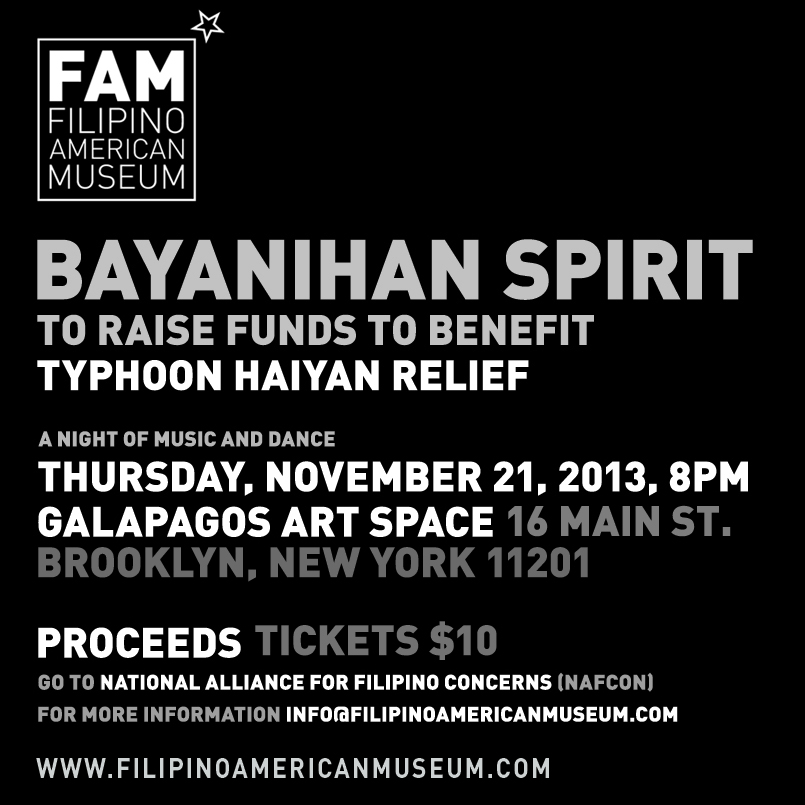 According to Nancy Bulalacao, a FAM founding member, “At FAM we have the ability to build a coalition that demonstrates a solidarity as New Yorkers and Asian Americans by coming together to support the real efforts for relief on the ground in the Philippines. We are artists, writers, musicians, cultural and community organizations moved by the tragedy and looking for ways to express our support. We serve constituents who are directly affected by the tragedy. What happens thousands of miles away resonates directly with us here. The level of loss in the wake of Typhoon Haiyan can be felt no matter who you are or where you live.”

Assemblymember Ron Kim stated, “I join my colleagues in government and all our community members in feeling absolutely heartbroken over the recent natural disaster in the Philippines. Through the recent natural disasters that have hit our coast in the last two years, we know a fraction of what is going on now in some of the cities and towns in the islands of the Phillpines.  As part of the worldwide community, it is important to show our support and solidarity, now more than ever.  My office will continue to do what we can to support groups like FAM in raising relief funding.”

The Emcee for the evening was Miss Info from HOT 97. The program featured readings by Kilusan Bautista, Luis Francia, Bino Realuyo, and Lara Stapleton; music by Deep Foundation, DILIA*, Hydroponikz, !llmind, Joe Bataan, Masia One, Norman Vladimir, and Smokey Robotic; DJ sets by GETLIVE!, and Jon Santos; and a demonstration by Pekiti Tirsia Kali Elite. Food for the event was catered by Red Egg and Salome Tarts.

All proceeds went National Alliance for Filipino Concerns (NAFCON), whose “Taskforce Haiyan” is a grassroots relief effort coordinated directly between Filipinos in the US and those in affected areas of the Philippines. Funds will be spent on food, water and medical supplies and distributed by Philippines based groups. For more information, please visit NAFCON’s website by clicking here.

The hashtag #FAMaid was used throughout social media networks by FAM and by all of the partners to spread the word about the benefit.