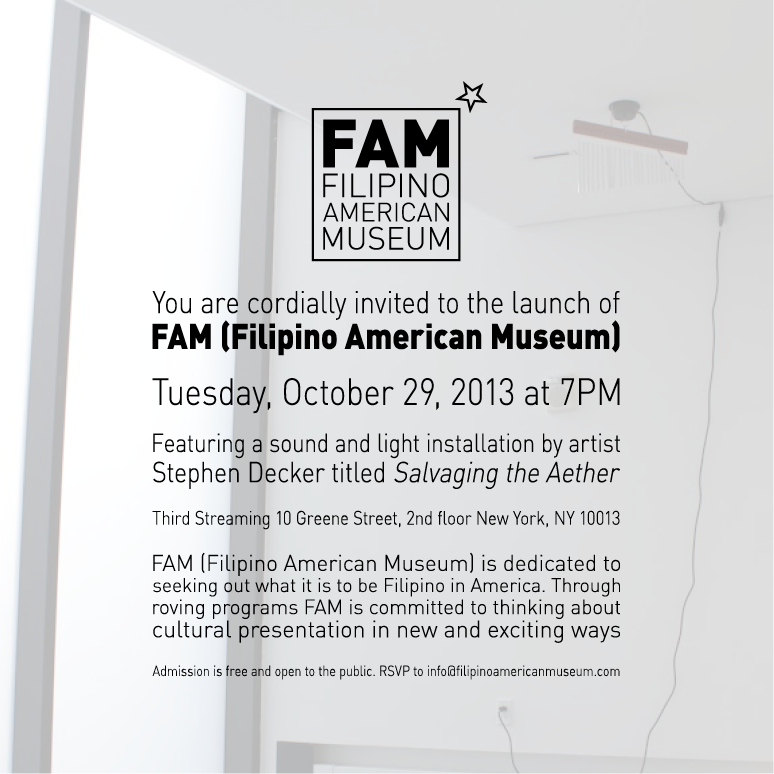 FAM (Filipino American Museum) —the first museum focused on examining the connection between contemporary Filipino American arts and the roots and
traditions of the Philippine diaspora— debuted in New York City on October 29, 2013. A start-up committed to presenting cultural programs in stimulating and unprecedented ways, FAM is dedicated to seeking out what it is to be Filipino in America. In the spirit of a diverse people, FAM’s roving programs serve as a fluid, user-generated, inquiry-based space. An untold American story,FAM presents its findings through live performances, exhibits, installations, community forums,online content and otherwise.

To kick off the founding of FAM, the public was invited to participate in a one-night event: a new sound and light performance by Queens-based, Filipino American artist Stephen Decker.

Stephen Decker’s Salvaging the Aether, a one-night sound and light piece transformed alternative art space Third Streaming in SoHo, into a conduit for interpenetrating sound signals. From street intercom transmissions to long distance radio frequencies, these amoebic presences inhabited the space inside the gallery, making audible what is already in the air. Decker’s live orchestration of found and constructed sound was built around noise making objects like a short wave radio transmitting Morse code, wind chimes attached to a disco ball motor, and a sub-woofer interacting intimately with baoding balls. Filipino Americans have made important contributions to alternative music, especially in the development of West Coast hip hop. Beginning in the 1990s, DJ Q-Bert and the Invisibl Skratch Piklz crew were at the forefront of creating sci-fi themed tracks composed of fast-speed record scratching. Their re-purposing of existing material echoes techniques deployed by Decker, and that is common in other Filipino cultural forms like craft arts and building construction, where appropriation is the product of both convenience and expression.

Stephen Decker (b.1987) is an artist currently based in New York. While in attendance at Yale’s MFA sculpture program he initiated a number of sound works for radio broadcast on pirate frequencies. Most recently his work has been performed for Listening Room at the Studio Museum Harlem and Crypsis at Distillery Gallery in Boston.